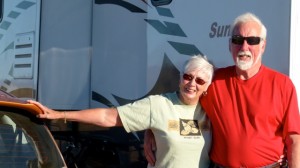 Meeting up again with Maisie and Dave Beattie of Sorrento, British Columbia, was the number one reason for our timing this year on Big River BLM land near Parker, AZ.

Our paths first crossed at Buckskin Mountain State Park, north of Parker, in December 2009. We briefly met again two weeks later at Big River BLM where they have been rendezvousing with other boondocker friends for a number of years.

This year we were able to meet some of these longtime dry campers and learned a great deal about solar panels and green camping. 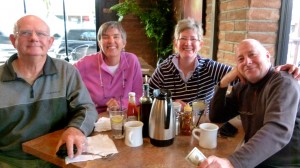 Other RV friends we were happy to see again were Candi and Ted Franklin of Cape Cod, Mass.

We first met Ted and Candi in November 2011 at the SKP Park of the Sierras, just south of Yosemite National Park where they were our campsite neighbors.

The Franklins drove into Lake Havasu City from their campsite on BLM north of town to met us for breakfast. We were getting new tires put on our 5th wheel and they took us to the Red Onion, a local restaurant they discovered.

Since leaving Park of the Sierras, the Franklins have pulled their 2000 21-foot Bigfoot travel trailer to many off-the-beaten-path primitive camping locations on BLM land in California and Arizona.

Meeting new friends and catching up with other RVers is one of the best side benefits of the RV lifestyle.