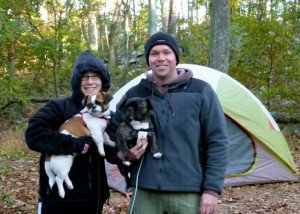 Stewart and Kate Gardner, both 37, were our neighbors on our brief stopover during October at the Matthews Arm Campground (mile 22.1) in Shenandoah National Park.

Stewart, a realtor at Coldwell Banker in Springfield, Va., and (Dr.) Kate, the Medical Director at VCA University Veterinary Clinic in Fairfax, have been avid tent campers for years–but maybe not for long.

With busy work schedules, the Gardners don’t have as much time to camp as they would like, so they usually end up somewhere within a few hours drive of Washington, D.C., including Shenandoah National Park.

“We have done Shenandoah National Park the last three years in the fall, and this year was actually the first year we did not see a bear,” said Stewart in an e-mail. Last spring the couple flew to Las Vegas and tent camped at Hole-In-The-Wall Campground in the Mojave National Preserve and at Valley of Fire State Park in Nevada. “This was our coolest camping experience by far,” said Stewart, “the topography, the wildlife, everything was new to us.”

Stewart said that when he was young his grandparents had a “big” Allegro motor home, “it had to be 30-plus feet,” he said. “They took me to Niagara Falls one summer and on a couple of other shorter camping trips. My grandfather would honk the horn every time he went under a bridge and my grandmother and I would play car bingo while he drove. Darn it, was always tough to find that green Corvette.”

These days the Gardners are widening their camping options and are considering a small, light-weight recreation vehicle.  “We originally had thought about getting a used pop-up camper to tow behind our truck,” said Stewart. “Something easy and inexpensive to get us started and then if we were to get enough use out of it, we would upgrade to something larger. But after speaking with Jimmy (Smith) and Vinnie (he was in the large RV on the other side of you guys), I am now considering the slide-in camper. I like the flexibility it offers and we would not have to tow anything. And one can always still tent camp as well, even if you have an RV.”

Photo: Kate and Stewart Gardner with their American Bullnese dogs, Talulla, a brown and white 7-month old (on right) and Roscoe, a black and white 7-years old. (Julianne G Crane)