Yesterday I received an email from my cousin, Bob, stating: “If you need a quick pick me for the day … ” and there was a link to this video. 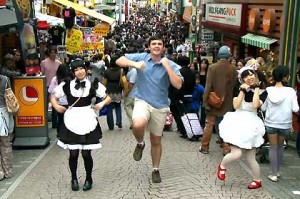 It seems that for almost a decade, young global traveler Matt Harding has been dancing his way around the planet and making extremely popular videos of his light-hearted adventures. “Travel is important,” states Harding on his Web site. “It helps us learn what we’re capable of, that the path laid in front of us isn’t the only one we can choose, and that we don’t need to be so afraid of each other all the time.”

Earlier this year, Harding released his fourth video: “Where the Hell is Matt? 2012.” It features Matt and thousands of others dancing in 71 locations, comprising 55 countries and 11 US states. The video uses the song “Trip the Light”, composed by Garry Schyman and sung by Alicia Lemke.

Click on arrow above to play … if that doesn’t work … click on this link. Bottom photo: Matt Harding dancing on the streets of Tokyo. (Courtesy of Matt Harding.)