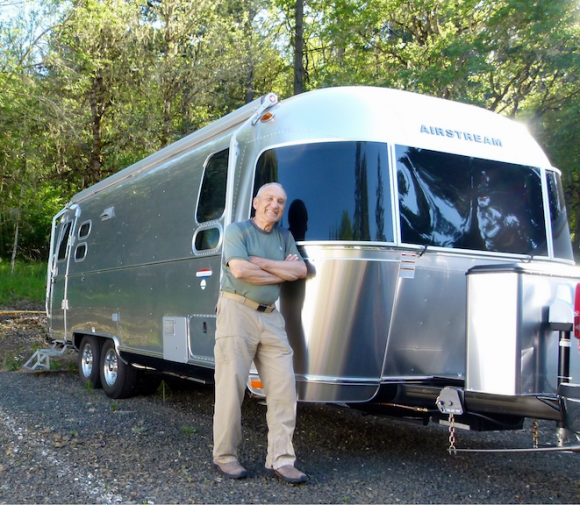 The most recognized Recreation Vehicle on the road today is the iconic streamlined, aerodynamic aluminum Airstream. With its unique metallic exterior, Airstream has been called the Silver Bullet, Toaster-on-Wheels, and the Rolls-Royce of travel trailers.

“I call this my aluminum tent,” says former tent camper Carl Tipton as he runs his hands along the sleek exterior of his 2017 25-foot Airstream International Serenity. “It is lightweight, stable on the road, and easy for a single guy to set up and handle on his own.”

As a young man in the 1950s, Tipton remembers watching newsreels of Airstream’s charismatic founder Wally Byam leading exotic caravans around the world. Byam, a genius at promoting his streamlined aluminum trailers, wanted to prove the road worthiness of his riveted machines.

Airstream’s retro art deco design and construction have “changed very little over the years,” according to Ohio-based Airstream. “Why? Because journeys that span the length of continents, roads or no roads, don’t lie: Airstream trailers are travel tested and adventurer approved.”

Part 2 of this 4-part series talks about how Airstream’s legendary semi-monocoque aluminum trailers are known for their handcrafted quality construction.

Photo: Carl Tipton, an RVer for more than 40 years, selected the 2017 Airstream International Serenity 25FB because of its quality of construction and panoramic windows. (Julianne G. Crane) Bottom: One of Airstream’s off-paved roads caravans in the 1950s. (Airstream)