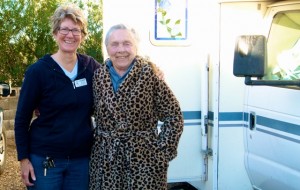 Two years ago, about this time, Vivian Grybko, a shy but independent woman, crossed my path at the Escapees’ RoVer’s Roost SKP Co-Op RV Retreat in Casa Grande, Arizona.

We became fast friends over a brilliant sunset and a cup of coffee the next morning in her 1999 24-foot Jamboree class C motor home. I wrote a profile about her life on the road for WomenRVers.blogspot.com

Just the other day when Jimmy and I stopped at RoVer’s Roost to spend the night in Dry Camp, I checked the visitor board to see if anyone was in the park that we knew. And there was Vivian’s name, just three sites up from us in Dry Camp.

I went over and knocked on her door–oh my it was good to see her again. We talked for about an hour and it was wonderful to know that she is still living a full life RVing about eight months a year. 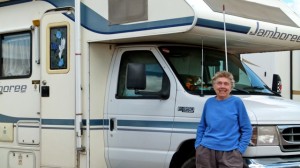 Vivian, who turned 80 recently, has been solo RVing extended-time since soon after her husband passed 15 years ago.

One group she really recommends to other singles out there traveling in the recreation vehicles is WIN (Wandering Individuals Network). “It’s a great group of people,” said Vivian. “There is always something planned.”