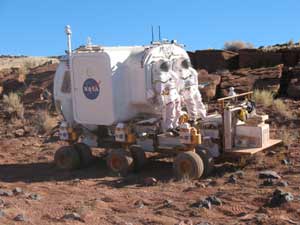 According to an item posted recently on domain-b.com, “NASA unveiled a new lunar rover on Friday (Oct. 24, 2008)  whose design may well transform space exploration as it would allow astronauts to roam large distances on the moon without donning cumbersome spacesuits. NASA is aiming to return to the lunar surface by 2020.

“The Small Pressurized Rover Concept vehicle resembles a small, futuristic recreational vehicle mounted on six sets of wheels – 12 in all. It is currently being tested in a rocky lava field in northern Arizona, which resembles the surface of the moon.”