We could not see it from our site at Antlers Campground, but we knew it was there.

‘It’ can’t be missed. Approaching from the north or south along I-5 in California,  on a clear day, Mount Shasta  looms in the distance for as far as 140 miles. This magnificent dormant volcano with its brilliant shroud of snow dominates the region.

Jimmy and I wanted to camp in the Shasta-Trinity National Forest, yet near I-5, and Antlers Campground sits less than a mile off I-5. Antlers is among the 15 developed campgrounds in the Shasta Lake area of the Shasta-Trinity Forest Service that provide camping sites with a bear box, fire ring, picnic table and paved parking spur. We travel in truck / camper and had no problems maneuvering through this campground; however, I would have been extremely nervous trying to do the same thing with our 28-foot fifth wheel. 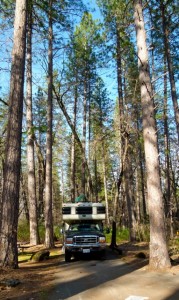 (Remember those folks with ‘American the Beautiful – National Parks and Federal Recreational Lands Pass’ camping is 50-percent off stated fees.  We paid $10 for our one-night stay.)

Because there is a “railroad access trail” running alongside the park, there will be periodic diesel smell and train activity 24/7.

None the less, Antlers Campground remains one of the most popular Shasta-Trinity forest service campgrounds because of its proximity to I 5., near Exit 702.

During the high season, you can make reservations at Recreation.gov, or call 877-444-6777. On-line and call-center reservations carry a service charge.

For more information about Antlers Campground, and Lake Shasta and its current water level, click on RVShortStops.com