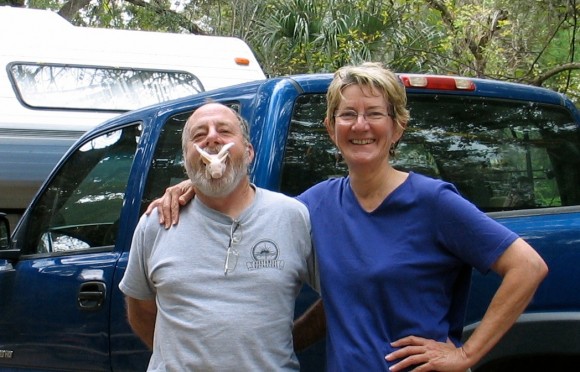 It had to happen. Without a dog, cat or bird as our pet companion, we had to invent some kind of mascot for our RV trips and why not “Pinky, the Flying Javelina?”

(First of all, yes, we know the difference between a pig and a javelina … but try to find a cute, small, soft, toy javelina, they’re just not out there.)

To continue with the story. The germination of the idea for our mascot goes back to last November when we were camped in the snow at Davis Mountain State Park in southwest Texas.

We had just come out of Big Bend National Park and couldn’t believe that we encountered, yet another, snow storm. (Last year on our three-month tour of the Southwest, we were always outrunning one storm or another.)

The adverse weather plays an important role in this saga, since it was because of the slushy snow, icy winds and encroaching darkness, that we quickly off-loaded all the cargo we had stowed inside our camper. This included two bicycle wheels, a 5-gallon fresh water jug, an extra propane tank, and a large, heavy-duty Igloo cooler. The rugged cooler is where we stored all of our dry foods including almonds, flower, sprouting seeds, rice, beans and grains. 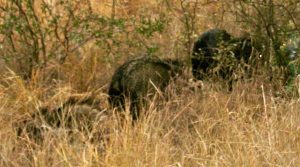 As I mentioned we had recently left Big Bend where each campsite had huge signs that warned of roving packs of javelinas and the importance of securing food in the provided storage lockers. Because there were no such food lockers at the Davis Mountain Campground and because it was freezing, we thought nothing about placing the cooler outside.

Nothing that is, until a little after midnight, when Jimmy wakes me up shouting, “Can you hear that? It’s javelinas! We’re being attacked by javelinas!”

If you’ve never heard a javelina, there are plenty of snorts and grunts here. Now multiply that by 20 very hungry, angry, freezing critters and you’ll get a sense of our nocturnal visit. And speaking of ‘sense,’ javelinas emanate an odor so foul; it is rarely found on a living human nor beast.

When Jimmy opened the camper’s door, there, only a few feet away was a snarling pack of a nasty, smelly, ugly collared peccaries cage-fighting each other over the feast they uncovered in our up-ended cooler. There was nothing polite or pretty about it.

All through the night we would hear them snarling; feel them bounce off the camper; and, of course smell their musk.

By morning, with almost two inches of snow on the ground, we thought they would be gone. But no, there they were, no more than 15 feet from the truck — quietly sleeping, a la “Where the Wild Things Are,” all curled up in snow-covered pile.

We started laughing and just had to admired their audacity and sense of community.

That holiday season, while looking for stocking gifts for Jimmy, I spotted this pink flying pig finger puppet. Since then, somehow it seemed only natural for it to become our traveling talisman.