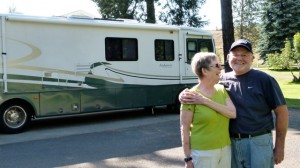 Jim and Diana Garot retired “as soon as they could,” picked up their 1998 Holiday Rambler Endeavor class A motor home and hit the road to “visit family and friends spread out across the country,” said Diana.

When they are not on the road in their 38-foot motor home, the Garots live in a 55+ community in Oceanside, Calif.

It was in Southern California that Diana and I became friends. In fact, come to think of it, she is my ‘longest’ girl friend–dating back to Golden Valley Junior High School in San Bernardino (then famous for its orange groves and being a stop along Route 66). 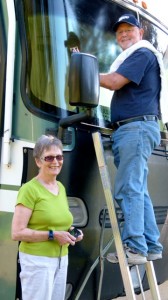 The Garots recently pulled over at our (temporary) place north of Spokane, Washington, as part of their annual extended RV trip to visit grandchildren in Havana, N.D. They have been making their multi-thousand-mile loop road trip from Southern California to North Dakota via the Midwest (and other points East) for more than a decade.

Jimmy and I had last seen them when we parked in their former home’s driveway in Palmdale, California. That was back in early 2010 toward the end of our first snowbird migration from the extensive Eastern Washington winters. (For a little about that stop click here.) 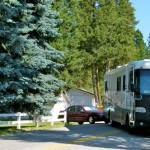 After leaving our part of the country, they are rendezvousing with more RV friends along the Oregon Coast before meandering down scenic Highway 101.

To read more on Diana and Jim Garot, click here.