While the endangered California Condors may never win the ‘cutest chicks’ award — they can be fascinating live viewing and listening.

Although much of the time it could appear rather dull viewing when Mom or Dad is covering their white fluffy chick with their body for warmth. Do not judge too quickly–wait a moment, listen carefully and you might become captivated, as I was, by simply hearing the background noises near the nest cave … and inside the cave, listen for the adult’s breathing and scratching noises from it’s small movements. And, if you are lucky, you may get the occasional glimpse of this rare one-week old chick … which can be a soaring sensation. (See still photograph below. Double click to enlarge.) 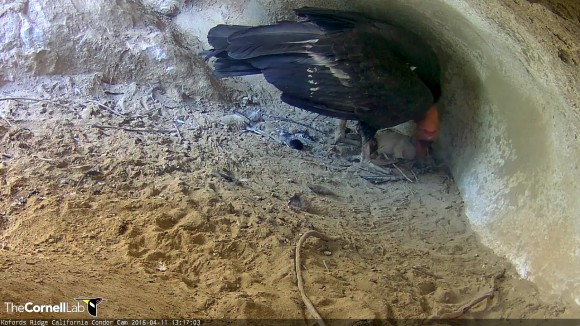 The actual refuge “is currently closed to the public and has been since its establishment in 1974 due to the sensitive nature of California Condor Recovery Program activities, the sensitivity of its resources, and lack of public access to the site.

“As a result of the access constraints, all refuge visitors have been guided by refuge employees or led by partner organizations educated in refuge rules and regulations, such as the Friends of California Condors Wild and Free. Staff and partner-led guided interpretive tours provide limited opportunities for the public to engage in wildlife viewing and photography. Generally, the hiking groups at Hopper Mountain NWR do not exceed 25 people per event.”

So watching and listening to the live Condor Cam provides an extraordinary privileged peek into a very private place. Because there is no artificial light in the nest, if viewing the live cam at night the screen will be dark.  But, wait, turn the sound up and listen--you might just hear life.