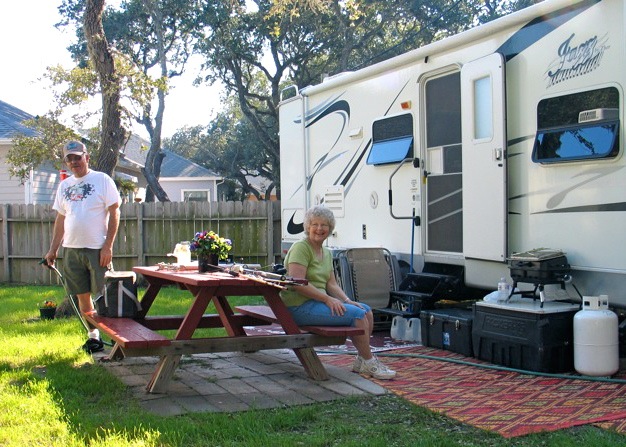 This is especially true when your neighbors are within 10-15 feet of your back door.

That’s what we discovered in our Rockport, TX, RV park on our first winter here in 2011.

Alberta and Myron Scott of Hill City, Kansas, were strangers to us when they backed their 28-foot Thor Jazz into the site next to ours in early January. By the next morning Myron was advising us on where to buy winter rye grass seed for a fast-growing lawn in the sandy coastal soil of Texas.

Myron retired in 2007 from the State of Kansas Department of Transportation. Alberta spent 30 years as a nurse’s aide for the elderly.  “We had had enough snow and wanted to travel while we were able,” said Alberta.

Since 2008 they have been making the two-day trip south from northwest Kansas to the Texas Coastal Bend. Early on, the couple, married 48 years, towed their 2005 travel trailer with a 2004 GMC 3/4 ton truck (equipped with a special tow package and Allison transmission).

A few years back, however, they found they could store their trailer in Rockport for nine months for less than $300. “We figured we would spend at least that much in gasoline alone by towing it,” said Myron. “Besides, we don’t use it at home anymore because we have a small family cabin in Colorado we go to in the summer.”

The Scotts both love the outdoors and fishing. “We’ve always camped,” said Alberta who was raised on a farm. They started with a tent, then went to a slide-in pickup camper, then into a couple different sized travel trailers.

“We always went camping with our children because it didn’t cost much money,” recalled Alberta. “Now we do it with our grandkids.”

Photo: Winter Texans Myron and Alberta from Kansas have been coming to the Rockport area since 2008. (Julianne G. Crane)