We camped here at the the RoVer’s Roost RV Park near Casa Grande, Arizona., an Escapees RV Club member park, a year ago, staying about a week because of high winds across the desert west of here.

This season we are heading in the opposite direction and we’re stopping over for two days in dry camping. Just long enough to take a couple long, hot showers and catch up on laundry. 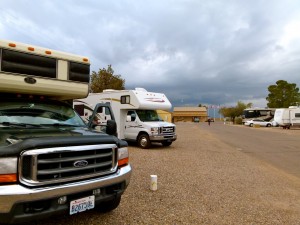 Originally we were planning on stopping at the SKP Kofa Koop in Yuma, Ariz. However, they were having their annual meeting this week, and no sites were available. So we pushed on another 150 miles or so to Case Grande. Along I-8 we traveled through the Sonoran Desert National Monument where we encountered stiff winds, rain, lightning, rainbows and snow pellets. An amazing drive.

We arrived at SKP RoVer’s Roost RV Park late Monday afternoon, on the eve of “The Odd Week Winter Carnival” to yet another full SKP house. There were, however, a few boondocking spaces available.

Tuesday morning we attended The Odd Week kickoff ‘Baked Omelet Supreme’ Brunch, where members, true to the spirit of the week, started dressing oddly. Dennis, (on the left) was dressed ready for the warmer climes of the south seas? Mexico? Or it could have been a preview for The Odd Hat Happy Hour slated for Tuesday afternoon.