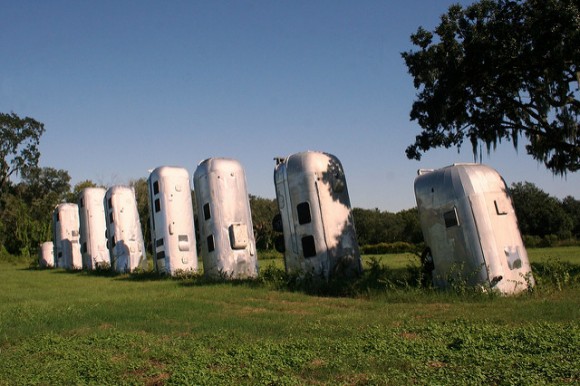 RV snowbirds traveling along I-4 between Tampa and Plant City in Florida have been getting an eyeful of the “Airstream Ranch,”since early 2008. Some report that it zips by pretty fast, so be ready with your camera.

However, according to RVTravel.com, “Florida’s Airstream Ranch, a Stonehenge-like display of the classic trailers, will soon vanish to the realm of memory. The display of half-planted-on-end trailers will soon give way to the construction of – what else – an Airstream dealership. Inside the dealership, the new owner promises visitors an Airstream museum.”

In Dover, Florida, it was erected by RV dealer Frank Bates and is an art tribute featuring eight Airstream travel trailers–and it is fun.

Early on, Ken Storey of Roadside America.com wrote: “Frank Bates created what he says is a tribute to roadside architecture, and what his critics claim is his most audacious advertising stunt yet. Frank buried eight Airstream travel trailers nose-down, in a strip of land along the eastbound lanes of Interstate 4 in Dover, Florida …” read more in “Airstream Ranch: Art or Ad?”

Read more by clicking on a (drive-by) RV Short Stop.

Photo:Travelers along I-4 near Dover get a quick view of “Airstream Ranch,” a display of eight aluminum travel trailers near Frank Bates’ RV dealership on McIntosh Road. While some have called the roadside kitsch an eye sore, Bates calls it art. Whichever, it brings a smile to most passersby. (Source: Bates RV)