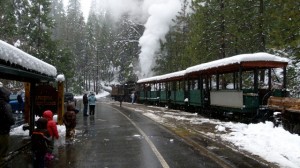 Longtime friends from the Bay Area were visiting for the weekend. We’re currently at the SKP Park of the Sierras south of Yosemite.

My gal pal, Martha Kjolsrud, and her daughter, Becky Sackville-West, (pictured below) were staying in Oakhurst.

We hadn’t seen each other for more than 1-1/2 years and, in addition to getting caught up on each others’ lives, we wanted to drive up to the Yosemite Valley. However, when we started out, the road into Yosemite was requiring snow chains or 4-wheel drive and snow tires because there had been, according to one local source, 17 inches of snow the previous 24-hours. 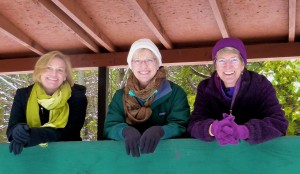 It was snowing when we arrived, however, by the end of the hour-long narrated ride, the sun was breaking through. After stopping at the small Sugar Pine Railroad museum, we learned the road was open to the Yosemite National Park. (Read more about that by clicking here.)