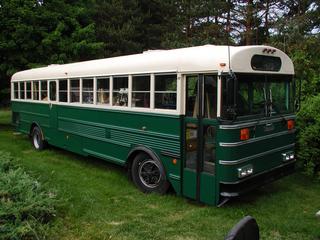 It seems Jake Von Slatt stumbled onto a fantasy back in 1982 when he was a college sophomore and standing in a long line to buy text books.

“The line was not moving at all so I put my books down on the floor and started flipping through the coffee table books on display,” recalled Von Slatt. “The book I chose to pick up first was titled ‘Rolling Homes – Handmade House on Wheels‘ by Jane Lidz. Thus the seed was planted.”

More than 20 years later, the middle-aged Von Slatt started acting on that bucket list dream and bought a school bus on eBay for around $2,000.  It was a 1989 Thomas Saf-T-Liner MVP with a rear mounted CAT 3208 engine. 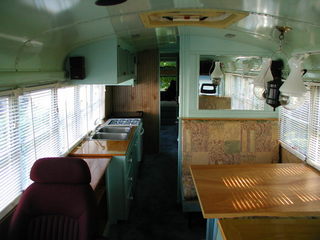 Over the next several months Von Slatt did a full bus conversion using a myriad of recycled materials along with inspiration from online resources and a copy of Ben Rosander’s “How to Select and Convert Your Bus into a Motorhome on a Shoestring.”