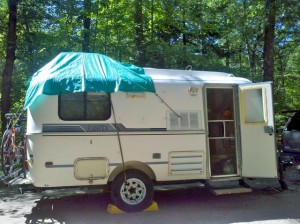 “We had a new adventure/ traumatic experience that is somewhat represented in the photo. No, the Casita did not spring a leak,” writes Kevin Justis of Susanville, Calif., in a recent e-mail.

“As we were setting up in a Gull Lake Corps of Engineer site in Minnesota, Janie noticed what she thought were a few flies buzzing around. As we sat down in the trailer to eat lunch after a nice bike ride on the nearby Paul Bunyan trail/bike path, we noticed a few yellow jackets buzzing around. A few whacks with fly swatter, then back to our meal. Oh darn, a few more. Janie takes her meal outside and notices a bunch of them flying around the AC unit. KJ checks and sure enough they are coming inside via the duct work.

“Thus the tarp over the AC and plastic bags stuffing the vents inside. It helps some but does not completely stop the invasion. By this time we have killed dozens of them and both of us have been stung, thankfully only once each.

“A trip to a local store later and we are spraying the top of Casita with one of those products made to work from 20 feet which severely slows the attack. Now only a few coming in and some are breathing their last. Still a number buzzing around over the tarp.

“By now we have abandoned the Casita and are only going in to occasionally remove the fallen and dispatch the hardy.

“As the sun sets, we venture in and reluctantly decide we will go to bed, only other option is a motel room which I think JJ would have gladly welcomed. In the morning only three bodies found and they are in the plastic bags on the vents.

“Where they came from, who knows. After traveling several hundred miles today, only two bodies found. My bite looks pretty ugly but am just relieved that it was not worse.

“We have been invaded by Argentina ants in Texas and had a mouse inside a cargo area once in Arkansas. If a plague of locust arrives next, we may retire from the road.

“Life on the road can provide adventure in new and sometimes painful ways.”

Read more about Jane and Kevin Justis by clicking here.