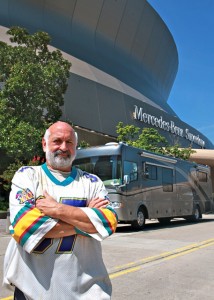 Every weekend in autumn, millions of football fans across America roll their recreational vehicles into stadium parking lots, pull out their grills, and become part of a huge tailgate party.

In fact, pre-game tailgating is frequently cited by RVers as one of the most popular ways they use their rigs during the fall and winter months, according to the Recreation Vehicle Industry Association.

Tailgaters seem to thrive on barbecue smoke, parking lot camaraderie and bragging about their home team.

“Where else can people of all backgrounds come together, not only to cheer and show support for their favorite team, but also to make new friends, relax and have fun,” said Joe Cahn, the self-proclaimed Commissioner of Tailgating.

Cahn is living what many football fans might believe is the ideal life. Each year he averages 35,000 miles in his 40-foot 2005 Country Coach deisel-pusher motor home. Between now and the Super Bowl, he will attend at least 45 NFL, collegiate and high school football games.

And Cahn, “the world’s only professional tailgater,” owns dozens of jerseys including one from every National Football League team. At each game, he faithfully wears the home team colors. “People always ask me where I’m from, and I say ‘I live here now,’ and point to my RV.” 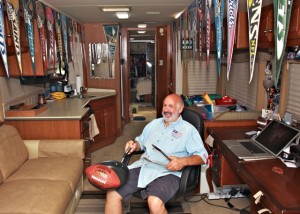 In the 17 years since Cahn became a full-time RVer, the former New Orleans Cajun cooking school owner has driven more than 800,000 miles, attended more than 850 tailgate parties, and has owned six motor homes.

His current “Inspire 330” coach has three slides that provide for a roomy living area and sleeping space with queen-size bed. This rig comes with a 400-horsepower Caterpillar powerplant with 1100-pound/foot torque and an Allison transmission.

“Tailgating is the perfect American neighborhood,” he said. “It is a place where you are not judged by your religion, ethnic background, race or financial status. You are judge by what color jersey you have on.”

The commissioner’s pet companion on every trip is Sophie, a smoky-colored Calico shelter cat he rescued almost a dozen years ago. “She loves to travel and sits in the passenger’s seat as my navigator,” he said.

“The thing that I love most about being a full-time RVer is that no matter where I am—I’m always at home.”