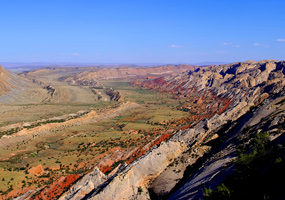 Capitol Reef National Park is located in south-central Utah in the heart of red rock country.

It is a “hidden treasure filled with cliffs, canyons, domes and bridges in the Waterpocket Fold, a geologic monocline (a wrinkle on the earth) extending almost 100 miles.” (The name Waterpocket Fold reflects this ongoing erosion of the rock layers. “Waterpockets” are basins that form in many of the sandstone layers as they are eroded by water.)

Nearly 10,000 feet of sedimentary strata are found in the Capitol Reef area. These rocks range in age from Permian (as old as 270 million years old) to Cretaceous (as young as 80 million years old.) The Waterpocket Fold has tilted this geologic layer cake down to the east.

The park gets its name “Capitol Reef: capitol for the white domes of Navajo Sandstone that resemble capitol building domes, and reef for the rocky cliffs which are a barrier to travel, like a coral reef,” according to the NPS website.”

As for camping, after a number of days of primitive camping down dirt roads, we opted for the 71-site Fruita Campground, often described as “an oasis within the desert.” It is adjacent to the Fremont River and surrounded by historic orchards planted over the years by Morman settlers. 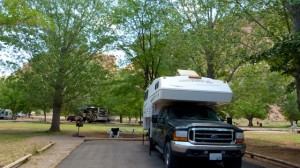 This developed campground has no individual water, sewage, or electrical hook-ups, and no showers. But there are no complaints for the nightly fee of only $10, or $5 for Golden Age/Senior Pass and Golden Access/Access Pass holders.

There are also prmitive campsites at no cost. All campsites are on a first come, first serve basis. No reservations.