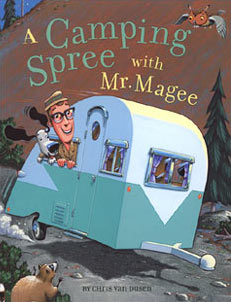 This is the first in a series on ‘Summer reads for young RVers.’

Written and illustrated by Chris Van Dusen, ‘Camping Spree’ is a terrific read-aloud picture book for every young child’s library, RVer or not. (Especially good for grandparents to take along on a first camping trip with their young grandchildren.)

Van Dusen’s rhyming, brilliantly-illustrated story details a camping trip with Mr. Magee and his trusty dog, Dee. The plot combines an inquisitive near-sighted bear, a runaway teardrop trailer and a couple of other light-hearted misadventures.

“Ever since I was a kid I’ve loved those 1950s Teardrop trailers,” said Van Dusen in a telephone interview shortly after the book was published, “so I modeled Mr. Magee’s trailer after them.”