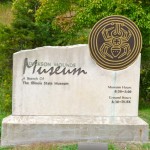 About a month ago we were driving along U.S. Hwy 136 east of the Missouri border in central Illinois and I was talking on my cell with our friend and RVer Sue Arbuckle about directions to their farm (where we would be staying that evening).

When I told her approximately where we were, she said we were within a few miles of one of the major on-site archaeological museums in the United States and suggested we stop by to see the Dickson Mounds Museum.

There was a bit of rain that day and at first when we drove up to the museum we thought that it was closed because there was only one other car in the parking lot.

But no, it was open and it was free. What a find. This museum’s amazing interactive exhibits, fascinating information and professional presentations are exceptional. Such a place should be on all RVers’ Short Stop list when they find themselves in west-central Illinois.