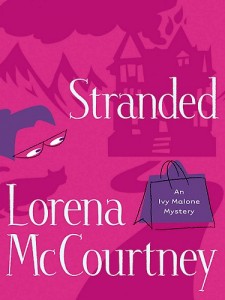 Ivy, on the lam and hiding out, picked up a small class C motor home at the end of the second novel, “In Plain Sight” (2005). Then she was “On the Run” (2006) in the third book of this amateur detective mystery series. Book four, “Stranded” (2006), starts with super sleuth Ivy still on the run from the mob. She ends up in a small town in Colorado with her broken-down motor home, a stray cat, and a young traveling companion, Abilene, a hitchhiker she picked up in Oklahoma.

Before long, however, excitement erupts with a Roaring ’20s chorus line, an entertaining cast of characters and, most importantly, a dead body.

A prolific writer, McCourtney was born on the Spokane Indian Reservation in Wellpinit, Wash., and is a graduate of Washington State University. She is an award-winning author of several dozen novels. She currently lives in southern Oregon, where she and her husband are longtime RVers.

Read more about McCourtney in an article I wrote for the Spokesman-Review in “RVs star in new detective novels.”