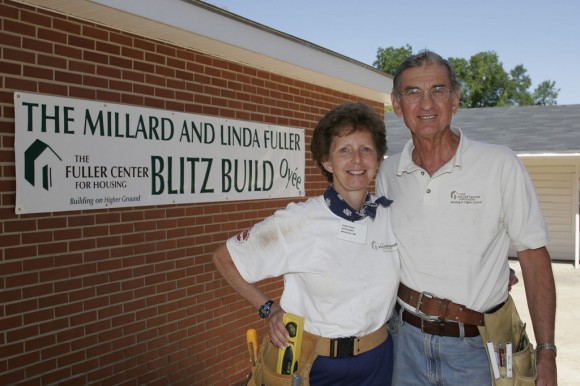 Millard Fuller, the visionary leader whose ideas and tireless work created Habitat for Humanity, died early on Feb. 3, 2009, following a brief illness. He was 74

According to a news release from Habitat, Mr. Fuller led Habitat from its founding in 1976 until his separation from the organization and his founding of The Fuller Center for Housing in 2005.

“Millard Fuller was a force of nature who turned a simple idea into an international organization that has helped more than 300,000 families move from deplorable housing into simple, decent homes they helped build and can afford to buy and live in,” said Jonathan Reckford, chief executive officer of Habitat for Humanity International. “The entire Habitat family mourns the loss of our founder, a true giant in the affordable housing movement.  Our prayers are with the entire Fuller family.”

According to an item on The Fuller Center for Housing Web site: “Linda Fuller, Millard’s wife of 49 years and the co-founder of Habitat and The Fuller Center, said that great strides have been made toward fulfilling Millard’s vision of eliminating poverty housing around the world, but that there is still tremendous work to be done. Millard would want us to carry on with faith and strength.”

The couple was planning to celebrate their 50th wedding anniversary in August with a blitz build centered in Millard’s hometown, Lanett, Ala.

“We’ll probably go ahead with the blitz build. Millard would not want people to mourn his death,” Linda said. “He would be more interested in having people put on a tool belt and build a house for people in need.”

Former President Jimmy Carter issued a statement in which he called Fuller “one of the most extraordinary people I have ever known.

“He used his remarkable gifts as an entrepreneur for the benefit of millions of needy people around the world by providing them with decent housing,” Carter said in the statement. “As the founder of Habitat for Humanity and later the Fuller Center, he was an inspiration to me, other members of our family and an untold number of volunteers who worked side-by-side under his leadership.”

The family asks that donations be made to The Fuller Center in lieu of flowers, and “to help us continue the great work that is Millard’s legacy.”

For more on Millard’s life and work, visit Millard Fuller.com, or read the Associated Press article.